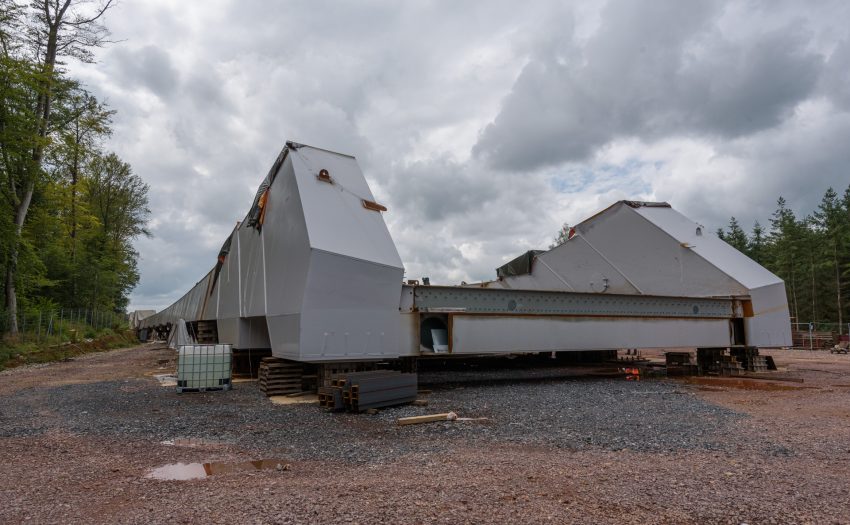 Many car drivers have already noticed the construction work close to the A3, just past the Aire de Berchem in direction Luxembourg. It is not uncommon for cars to slow down, much to the displeasure of the cars behind them, in order to get a glimpse on the metallic construction, which will become one of the largest of its kind in Europe over the next few months.

It is not without pride that Rui, CFL’s project manager for the new line, show us around the impressive construction site. The so-called OA 14 (ouvrage d’art or engineering structure) belongs to one of 7 structures, which are being built as part of the new Luxembourg – Bettembourg line. Nevertheless, it stands out among the other bridges as a bridge of superlatives.

One of the biggest steel railway arch bridges in Europe

With its length of 200 meters, its width of 18,5 meters and its dizzying height, a 40-metre arch (from the roadway slab below to the top edge of the upper arch), the bridge, which will later carry the two new tracks of the new Luxembourg – Bettembourg line over the A3, belongs to the largest steel railway arch bridges of the “bow-string” type to be admired in Europe. At the end of the mounting and welding work, the metal framework, including the reinforced roadway slab, but without concrete, will already weigh 5.900 tonnes – a real heavy load among Luxembourg’s bridges. Despite its length and size, the bridge has to adapt perfectly to the future geometric alignment of the new line.

The completion of the lower part of the bridge

Until October 2021 international specialists weld together the 22 individual parts of the two tension bands, including the roadway slap. The transport weight of the welded individual parts (steel caissons) from Belgium and France ranges from 40 and 120 tonnes. The tension bands, sort of the main lateral parts of the roadway slab, are connected with imposingly thick steel cross beams (oder ties, oder bars). At the end of the welding work, over 200 cross beams will connect the two tension bands. In addition, the roadway slab will be braced in the transverse direction by diagonally attached struts in the shape of a St. Andrew’s cross.

A lighter bridge through air

What may seem logical at first glance turns out to be a genius idea by the planners. In order to reduce the self-weight of the bridge (5.900 tonnes of pure metal framework), the planers of the roadway slab rely on lightweight hollow bodies made of plastic (Cobiax) in combination with lightweight concrete. These so-called “cobiax elements” are located between the different cross beams, so that the planned weight saving in concrete can be achieved, which will then later have a positive effect on the entire supporting structure in its final state when put into operation. However, the amount of concrete poured is completely sufficient to guarantee the stability of the bridge, even under load. This trick concept not only makes the bridge “lighter”, but also reduces the resource consumption of concrete – which saves time and money.

After completion of the welding work in October 2021, construction of the double arcs starts. These will also be delivered in individual elements (steel caissons) to then expertly be assembled and welded by skilled workers using specially erected temporary towers. After the arches have been assembled, another exciting moment arrives: the bridge is gradually raised to the level of the bridge bearings using hydraulic presses, aligned and finally brought into its final position by special vehicles (KAMAG). A feat of strength over the six-lane motorway that is scheduled to take place at the end of 2022.