The Robel: The CFL’s Swiss Army knife for maintenance and repair 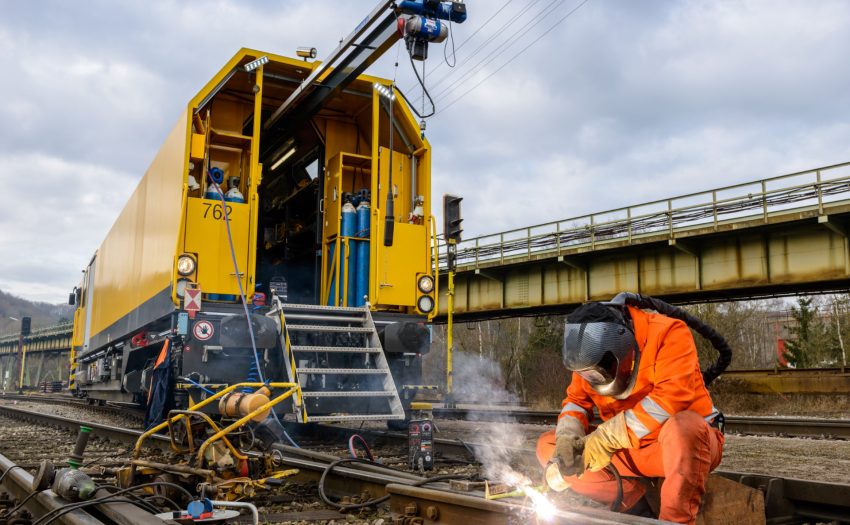 To ensure that customers can travel comfortably and safely by train, the CFL works non-stop on the maintenance and repair of Luxembourg’s rail network. Heavy machinery is used to help the CFL employees with this work. In a series of blog articles, we will give you an insight into the world of these strong and unique helpers. Today: The Robel – Part 2.
(You missed part 1? Read it here.)

The maintenance and repair of the current infrastructure is very important in order to continue to ensure safety for passengers, as well as for our employees. Therefore, maintenance work is carried out on the Luxembourgish railway infrastructure at regular intervals. As an all-round talent in the field of work machines, this is where the Robel, with the help of which our well-trained employees can carry out any repair without any problems, comes into play.

CFL’s Robel fleet consists of six different models with a total of 20 vehicles that can process and weld rails even in hard-to-reach places.

A distinction is made between different types of operations, in particular:

Delivery and processing of building materials on the construction site

The supply of construction sites with building materials is the Robel’s main activity and is carried out in cooperation with the central warehouse in Bettembourg. Construction materials include rails, sleepers, individual parts of switches, overhead line masts, signals, ballast, as well as any other parts necessary for carrying out maintenance work.

Special missions with the crane

These operations are very diverse: the cranes can be used to carry out work on the overhead lines or the signals, as well as on the rail infrastructure. The Robel’s tasks also include safety-relevant green maintenance work along the rails, such as cutting back branches that could otherwise interfere with train operation.

In addition to maintenance work on the railway infrastructure, the Robel is also available around the clock for emergencies. Disturbances can be of various natures, e.g. incidents where a CFL support train has to be pulled to the scene with the help of the Robel, or the clearance of overhead lines from fallen branches and trees. Also other objects in or near the track can be removed in the twinkling of an eye with the help of the Robel – all work that ensures safe train traffic.

In the driver’s cab of a track vehicle is room for up to 7 people. Among them is the driver who, besides the legally required training as a locomotive driver for the use of the Robel, must have additional qualifications, e.g. in the use of cranes. Also on board is a shunter who, during so-called shunting movements, i.e. when the wagons are placed in front of the Robel and pushed by it, offers the locomotive driver assistance, due to the limited visibility, by giving clear instructions and informing him about signals and any obstacles on the track.

Up to two people fit in the workman basket of a track vehicle. The small basket makes this model faster and more flexible, making it the best choice for smaller repair jobs.

The Robel 700 series (11 vehicles) is the all-round talent of the fleet. This traction vehicle of 36.5 tonnes is mainly used to transport material for maintenance work to the construction site. In addition, this Robel can also be used for work along the tracks, e.g. cutting back grass, hedges or branches that could interfere with train operation.

Thanks to sophisticated technology, it is also possible for these vehicles to pull many times their own weight with up to 1000 tonnes. Thus, towing a broken-down train on the network is no problem. In addition, it is possible to couple up to 4 vehicles together under the operation of a locomotive driver in order to handle even heavier loads.

This Robel 720 series (2 vehicles) is almost identical to the 700 series and differs only by its crane, which is equipped with a fixed working cage. Besides the fixed main arm, the crane of this Robel also has an additional articulated arm, which makes it more flexible in its movements. This additional freedom of movement makes it particularly suitable for working on overhead lines.

It weighs 39 tonnes and can be loaded with 5 additional tonnes.

On its own, this Robel can only drive 30km/h. For this reason, it is always brought to the construction site by a track vehicle, where, while working, it is then driven itself. If the driving trailer is towed, it can be transported at a speed of up to 80km/h. In this case, the driving trailer can serve as a control desk, with the track vehicle always providing the necessary traction, i.e. the drive. If the driving trailer runs independently, a second person, the shunter, always has to be in the driver’s cab, because the superstructures, for example cranes or the loaded material, block the driver’s view. The only exception: the machines of the 750 series with a clear view and thus the possibility of 1-man/woman operation.

It is possible to attach a cable winch to the crane of this driving trailer of 50 tonnes, making it particularly suitable for loading and unloading building materials, that can be processed immediately on the construction site. Frequent uses are for the construction of bridge railings, platform canopies, or noise barriers. The advantage of this Robel is that the large loading area of 12 meters can be loaded with up to 30 tonnes.

The CFL own 2 models of this series.

The main task of this Robel, of which the CFL own 2 vehicles, is to carry out welding work on rails on the railway network. These vehicles differ from the other Robel mainly because of their box body, i.e. the closed wagon, with integrated tools and a changing room for employees.

A traveller is installed in the box, which easily allows the workers to load and unload the heavy equipment needed to work on the rails.

This Robel is very similar to the 750 series, but impresses with a larger crane that can move larger and heavier loads. The areas of application for these two 67-tonnes vehicles are often exceptional. Thanks to the large cranes, lifting work, that could usually only be done with a very high effort from outside the tracks, can be carried out on the track itself. Indeed, overhead lines often hang in the way during maintenance work, which is why many places are difficult or impossible to reach. However, as the Robel works from the track itself, it is more flexible and its cranes are up to any task, be it clearing the tracks due to accidents, or maintenance work, such as replacing heavy rail parts. Often, the two machines of the 770 series are on the road as a double pack.

The CFL’s single vehicle of the 780 series weighs 66 tonnes, is equipped with a lifting platform and is used especially for work on overhead lines. Compared to a track vehicle Robel of this type, this driving trailer impresses with a larger platform that can accommodate up to four workers.