“Safety and quality at the heart of Coradia tests” 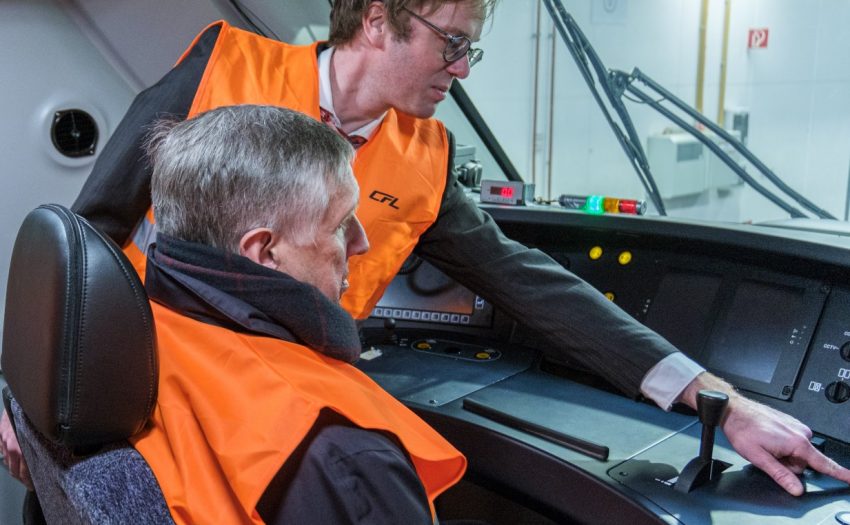 The first “Coradia Stream High Capacity” train from the CFL has arrived in Luxembourg for homologation tests. For the coordinator of this historic project, this step is part of a meticulous preparation process in order to guarantee quality of service and safety to the CFL customers.

The enthusiasm of the audience was palpable last Friday afternoon, 6th January 2023 at the CFL Storange and Maintenance Centre in Luxembourg-Bonnevoie to discover the 2403 “Coradia Stream High Capacity” train. Alongside the Deputy Prime Minister and Minister for Mobility and Public Works, François Bausch, the Presidentof the Board of Directors of the CFL, Jeannot Waringo, the CEO of the CFL, Marc Wengler, took delivery of the first of the 34 railcars ordered at the end of 2018 from the manufacturer Alstom and which will make up the 2400 and 2450 series of the CFL.

Having arrived from Arlon (B), where tests were carried out on the Belgian network, this multiple unit train is currently being tested on various railway lines in Luxembourg for the necessary approval of the “Coradia Stream High Capacity”. At the CFL, these operations are coordinated by a multidisciplinary team under the responsibility of Mike Strotz, Project Manager for the acquisition of this equipment within the CFL Trains and Equipment Department.

How are the preparations in Luxembourg for the introduction of this new rolling stock going?

Mike Strotz (M.K.): We can say that the preparations go back to the origin of the order, since the construction and initial preparation of these trainsets at Alstom correspond to specifications defined according to the specificities of the Luxembourg network. These specifications take into account our strategic priorities, including the safety of our customers and employees, which is non-negotiable.

The use of these new series on three rail networks for the needs of cross-border links with Belgium and France was also taken into account from the start. The preparations for the introduction of the trains are a succession of regular exchanges with the stakeholders involved internally as well as with the manufacturer Alstom, the certification company Certifer/Belgorail, which is in charge of the test campaigns, the ACF (Administration des Chemins de Fer Luxembourgeoise) and the ERA (European Railway Agency) of the European Union.

The test campaigns are, as it were, split up to obtain maximum results in different configurations. This meticulous monitoring of the specifications and these permanent exchanges can be explained all the more by the historic nature of this order with a budget of around 400 million euros.

Our goal is to gradually bring this new railway equipment to our customers from the beginning of 2024.

M.K.: As I mentioned, these 34 railcars – like most CFL trains – will be used in the neighbouring regions of Belgium and France. Cross-border travels to Germany are not planned for this series of railcars. It is therefore necessary to carry out tests in neighbouring countries to validate compatibility with the railway infrastructure of the respective country in order to obtain approval for the defined operating perimeter, as required by the European Railway Agency (ERA), which is responsible for authorising the entry into service of trains operating in several countries.

The tests in Belgium have been completed, those planned for France will be completed in February and we have therefore begun our campaigns in Luxembourg under the aegis of the certification company Certifer/Belgorail. Our goal is to gradually bring this new rolling stock to our customers from the beginning of 2024. The railcars will be delivered between 2023 and 2025 and will enable the CFL to increase the number of seats by 46% by 2025-2026.

What is the schedule for the tests planned in Luxembourg?

M.K.: The test campaigns began on 8th January 2023 and will be completed at the end of March for the single unit railcar, bearing in mind that each test campaign comprises five series of tests which are also carried out in several configurations, varying the length of the train by forming multiple units.

The multiple unit train will be tested on several lines in the country during the night for the first four test campaigns, with the fifth and final campaign taking place during the day in normal operation conditions. These tests will ensure that the new rolling stock meets all safety and operational requirements, including cross-border interoperability.

How important was the energy consumption of trains in the choice of supplier?

M. K.: When we issued a call for tenders, we asked the manufacturers who wished to apply to respect a certain limit of electrical consumption and to provide us with projections of the consumption of their equipment, knowing that the new generations consume less than the previous ones because of technological evolution. The 2400/2450 series is a lighter aluminium construction compared to comparable steel built CFL equipment. To top it all off, during the course of the project it was decided to add the Automatic Train Operation (ATO) system to the CFL Coradia Stream High Capacity, a fairly recent technology who covers one of the major goal, namely to reduce energy consumption. The projections provided by Alstom will serve as a basis for monitoring consumption in real life and making any necessary adjustments with the supplier.

These railcars are just as pleasant to operate as they are functional.

How do you personally feel about this project?

M. K.: It is above all a common adventure of a core team of 7 people from different departments of the Train and Equipment Department. The successful management of this project is also possible thanks to cross-functional work within the CFL, with the support of the purchasing department. the IT department, the legal department and the managers of our train conducters.

Personally, I really appreciate this project, which allows me to work at the cutting edge of technology, to learn new things, and to have the opportunity to be part of such a big order of trains. The cross-functional aspect and the connection between the various internal and external stakeholders is really exciting.

What can you tell travelers about these “Coradia Stream High Capacity” trains?

M. K.: These railcars are just as pleasant to operate as they are functional.  We were attracted by the attention paid to a modern design, reflecting the CFL brand image as much as possible, as well as to passenger comfort – both in terms of space and luminosity – and to connectivity with the presence on board of Wifi, USB sockets and screens for displaying passenger information. Not to mention ample space for bicycles and people with reduced mobility. We look forward to giving our customers a sneak preview later this year….