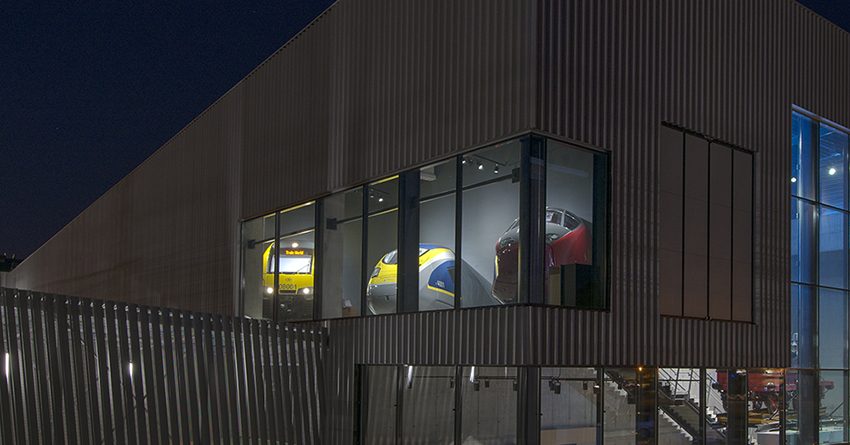 The railway museum Train World in Schaerbeek (Brussels) officially opened in September 2015, after ten years of preparations. During the first six months, around 100,000 visitors came to the museum, which is aimed at kids just as much as adults and pleases train fans as much as anyone else. It seems that even King Philippe of Belgium couldn’t hide his excitement during the official opening. #discover 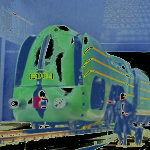 The queen of the exhibition: The dashing “Atlantic” with scenographer François Schuiten and his dog. 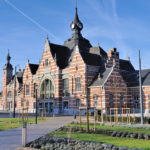 Old and new: the museum visit starts at Schaerbeek train station and follows the train platform to the four exposition halls 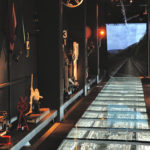 30 meters of history: Beneath rail switches from the last two centuries, the rail technology evolves under the visitor. 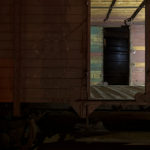 Perfectly integrated: the old service house has remained in its original location – the exhibition hall constructed above. 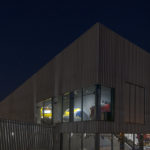 View from the outside: The Desiro, Eurostar and Italo driving towards the showcase

Little Milena is equally delighted. “Look, an airplane”, the almost four-year-old cries out while looking into the vivacious snout of the flame red Italo on the wall. “Our scenographer installed the Italian high-speed train in such a way that it seems like it is racing towards the spectator like a bird.” The director of the museum, Piet Jonkers, is pleased by the fact that the child has the reaction, which François Schuiten, the designer of the museum, intended to get. Next to the Italo, a Desiro and a Eurostar speed into the lit room, which can be seen through a large bay window from the trains circulating on the Brussels – Antwerp line until midnight.
The museum visit starts off in Schaerbeek’s historical station building from 1887, whose appearance has been left unchanged. The large sales hall is reminiscent of former times. Wooden fittings; tickets, punching machines and ticket validators behind the counters; station clocks, service dresses and full dresses from various eras. The long history of trains as well as the development of the Belgian railway network and the international connections all across the continent are shown on large screens.

The four exhibition halls can be reached via the platform where the visitor can admire heavyweights from nearly two centuries, among which the locomotive “Pays de Waes”, which managed to reach a speed of 60 km/h in its construction year 1844; a type 18 locomotive from 1902, which was twice as fast; and the “Reine du Luxembourg”, which was pulling the luxury train “Edelweiss” between Brussels and Luxembourg in 1928. The absolute queen of the mastodons is the type 12 locomotive “Atlantic” by Cockerill, which sets a new speed record by travelling from Brussels to Ostend in 57 minutes in 1939 due to its aerodynamic shape.

The exhibition shows Belgium’s privileged role in the development of the railway industry in the 19th century, when it was Europe’s second industrial power behind Great Britain. The young kingdom’s manufacturers were De Ridder, Saint-Léonard, Nivelles, Dyle, Tubize, Cockerill and many more. The first train line connecting two capitals meant that in 1846 it was possible to travel between Brussels and Paris in eight hours. 30 years later, the Belgian Georges Nagelmackers founded the “Compagnie internationale des wagons-lits” and in the fifties, Belgium made a significant contribution to the auto-train and the “Trans-Europ-Express“ (TEE) odyssey. In the nineties, the first international TGV line connects France with Brussels.

The impressive 30-meter rail, which the visitor can admire through a glass bottom, illustrates the development of rail engineering and railway sleepers. Old railway signalling, barriers from yesteryear, the furnishings of a post waggon, entire interiors of luxury trains, hospital trains and the Belgian King’s special train are on display here. The goods wagon, which took thousands of Jewish and Romany people from Belgium to the Nazis’ extermination camps between 1942 and 1944, is exhibited in a sober display and makes for a very moving sight.

The steel bridge “Pont de Luxembourg”, which crossed the river Maas in Namur until 2011, also made its way to Schaerbeek.
It was set up next to the old station and the museum hall was built around it. The bridge is also seen in the context of the war. It managed to resist all attempts to blow it up during both the First and the Second World War, whether by the Belgian, German or allied armies. Former service accommodation remains next to Schaerbeek station, in the same place where it has been for decades. François Schuiten has decorated it lovingly with items from the fifties, including the bicycle near the door.

The social aspects of the railway are also taken into account. In 1936, after the introduction of paid leave, the railway made it possible for workers to go on a modest holiday trip. Posters document the upturn of tourism.

The art of scenography

The railway museum Train World in Schaerbeek owes a large part of its attractiveness to the designer François Schuiten, whose scenography enthrals the visitor. The 60-year old Belgian lives in the Brussels municipality and has made a name for himself as a comic book artist and designer. He designed the scenography of the metro stations “Porte de Hal” in Brussels and “Arts et Métiers” in Paris. In 1992, he designed the pavilion for Luxembourg at the Seville World Fair.

With Train World, Schuiten has assembled old railway material and valuable collector’s items to form a harmonious ensemble in his hometown and takes the visitor on a journey through time by mixing the old with the new. After the historical delights, the visitors can experience what it is like to be a train driver in the simulator and go on a journey in the fascinating future of railway travel.
A must for kids and adults; for train fans as much as for anyone else!

La Cité du Train: Where the SNCF hoards its treasure