La Cité du Train: Where the SNCF hoards its treasure

SNCF’s mountain railway : The Chamonix Z604 has been on duty for several decades in the French alps 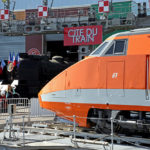 Welcome to the future. Since 1981, the first orange-coloured TGV has been travelling between Paris and Lyon 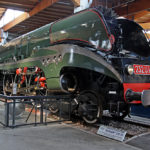 The train of the known car manufacturer. With its max speed of 172 km/h, the Bugatti autorail has been among the first express trains of the world

The “Cité du Train” in Mulhouse is Europe’s largest railway museum. This is where the SNCF has housed in its best memorabilia divided into different areas. Visitors have the opportunity in the “Parcours Spectacle” to get to know interesting aspects of the railway, to follow the development of the railway from 1844 to the present day in the “Quais de l’Histoire”, and to experience the railway first hand on the “Mini Express Alsace” in the “Panorama Ferroviaire”.

Indistinct loudspeaker announcements, hooting, hissing and puffing of powerful engines: As soon as visitors enter the first exhibition hall, they hear the typical sounds of a railway station. Their journey now takes them through the “Cité du Train”, where they can see around 100 originals from over 170 years of railway history.

Platform 1 of the “Parcours Spectacle” is all about holidays: Following the introduction of paid holidays in 1936, when the French travelled for the first time by train to the mountains and to the sea, the government of the “Front Populaire” negotiated a 40-percent discount on third-class tickets with the railway companies. The upholstery on the wide benches in the 3rd-class carriage exhibited is surprisingly soft and the toilets spacious. The sign on the door ‘Ne laissez pas les enfants jouer avec la serrure’ warns against allowing children to play with the lock.

Rubber wheels on the track #discover

The first railed vehicle on display is a 1936 Micheline. It was designed by the tyre manufacturer André Michelin and manufactured in his factory in Clermont-Ferrand, and actually ran on the track on rubber tyres. It completed the stretch from Paris to Deauville in the record time of 107 km/hour. Long after the tyres were out of use, the French – and many Luxembourgers – continued to call all railway traction vehicles ‘Michelines’.

On platform 2 an engine lies on its side on a pile of gravel, the thunderous bang of an explosion drawing attention to the active resistance mounted by the railwaymen during the Second World War. A television screen shows excerpts from the 1946 film “La Bataille du Rail” [The Battle of the Rails], which portrays acts of sabotage against the German troops in spectacular scenes. Excerpts from the film “La Bête Humaine” [The Human Beast], starring Jean Gabin, a free adaptation of the novel by Emile Zola, pay tribute to the railwayman and the hard life he sometimes led in his occupation.

It all started with the “Friends of the Railway”

In 1971 dedicated railway enthusiasts set up a museum with a variety of railway material in the freight station of Mulhouse-Nord. Five years later, they succeeded in convincing the town of Mulhouse and the SNCF of their idea of a railway museum, resulting in the creation in a new district of the town of the Cité du Train, which was expanded in 2005 to cover a surface area of 60,000 m2, making it the largest railway museum in Europe.

At the “Quais de l’Histoire” visitors follow the entire history of the railway chronologically as they pass steam locomotives, diesel and electric locomotives, traction vehicles, and passenger and freight cars: from the 1844 Crampton to the 2013 TGV Euroduplex.

When the enormous wheels of a 1949 Hudson are set in motion, the onlooker, deafened by the hellish noise, learns all about the technology of steam power. A 1911 Baltic has been slashed open, revealing its inner life; the water supplied to generate power is explained through a glass window on the tender. Visitors walk through a pit to find out what the underside of a 1936 Pacific looks like. Known as the “Golden Arrow”, it linked London via a ferryboat to Paris.

The significance of the railway

Next in the roll of honour is the Italian Ettore Bugatti, who, in addition to his legendary automobiles, also built a spirited traction vehicle for the railway. Further along is a refrigerator wagon built by the company De Dietrich to transport beer barrels from the Météor brewery in Reichshoffen, Alsace. The economic significance of the railway is also illustrated by a cauldron wagon, which was used to transport casting iron in liquid form from factory to factory for the Unimetal Steel Group in Rombas, Lorraine up until 1988.

In 1980, one of the finest exhibits of the museum especially delighted the then Grand Duke Jean on his visit to Mulhouse: the “Grande Duchesse” lounge car built for Luxembourg’s Grand Ducal family in 1894 by the Imperial Railways in Alsace-Lorraine, then owned by the German Empire. Beautifully decorated wrought-iron balustrades brought the noble guests inside the car, where, in addition to the private chambers, it is possible today to hire a spacious meeting room for special events.

The “Cité du Train” gives visitors an outline of almost two hundred years of railway history and allows those who are particularly curious to learn much more about the networks and trains. Comprehensive documentation explains the history and development, goes into greater detail on the economic and sociopolitical dimension of the railway, without neglecting the technical aspects.

Discovering the railway at play

In an ancillary room awaits the impressive model railway, whose many tiny trains and other detailed representations – right up to tourists taking photographs with flash on the rock overhang above a railway tunnel – are brought to life by dropping a coin in the slot.

Also entertaining is the section of the museum known as the “Panorama Ferroviaire”, located in the shadow of the exhibition halls. In this courtyard, visitors can watch at close range how locomotives are guided on a turntable onto the right track.

A miniature railway carries old and most of all young guests across the courtyard between the locomotives. It is sometimes powered by electricity, sometimes by steam.
Passing on the periphery of the museum grounds is the tram, in operation since 2007, which connects the railway museum with the city centre and Mulhouse railway station in just over a quarter of an hour.

How to get there?

Mulhouse is easy to reach from Luxembourg via Strasbourg on the new TGV line. Tram route 3 connects the main station via the city centre to the Cité du Train.

In the mood for more?

Check out one of our latest articles on the Train World exhibition. 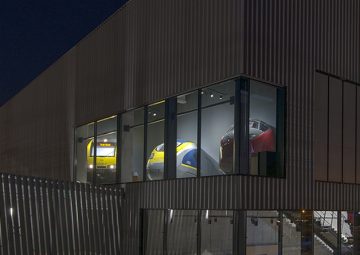