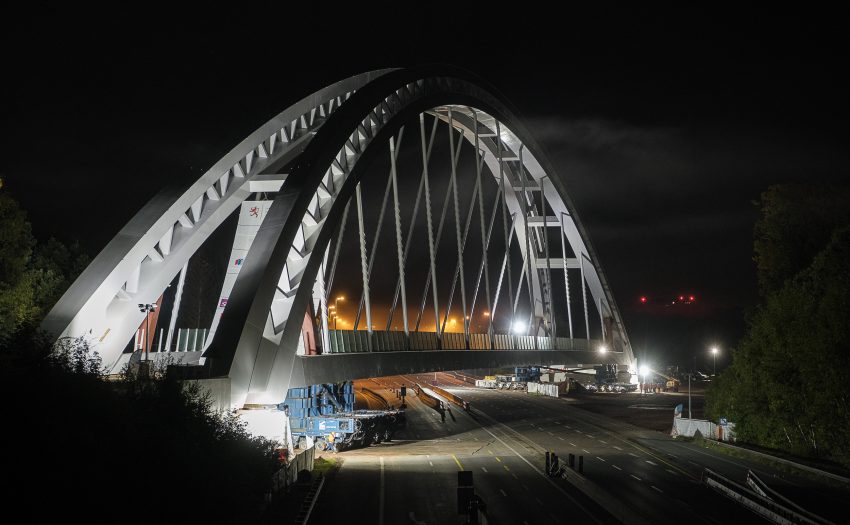 Tension, concentration, anticipation… All this and much more can be seen on the faces of the employees involved in the event of the year. The CFL project management and numerous employees of companies involved in the project to build one of the largest railway bridges of the “Bow-string” type are eagerly awaiting the event they have been working for since the beginning of 2019.

Last night, or rather this morning, the moment everyone was waiting for with tension finally arrived. The iron colossus with a dead weight of 5,850 tonnes was pushed across the motorway. A lot of preparation was necessary for this to work. In addition to the actual construction, which brought its own challenges given the size and scope of the bridge, it was above all the weight of the OA14 (Ouvrage d’art 14) that made the bridge shift an extraordinary moment. For more than a week, the metal construction was lifted day by day to the height of 5 metres, necessary for the bridge shift. A real feat of strength that required a lot of know-how and, above all, technology.

A total of 30 SPMTs (self-propelled modular transporters) were needed to move the bridge over the motorway. Each of the 30 transporters had 24 tyres, each of which is individually designed for a load of up to 12 tonnes. The day before, the function of the vehicles was checked and a first rolling test was carried out. Accordingly, all those involved looked forward with confidence to the starting signal, or rather the starting sound in this case, which was given by the Minister of Mobility and Public Works François Bausch and CFL Director General Marc Wengler around 1 o’clock in the morning. After the confirmation of the “go”, the dream, the theory, became reality.

Loudly and patiently, the hydraulic vehicles carried the extraordinary metal structure across the motorway, which was already closed for work carried out by the CFL and the Ponts et Chaussées from 8pm on Friday. The aim of the so-called bridge shift was to set the bridge down on the bridge bearings that had already been built in advance. Millimetre work that demanded full concentration from all employees. An orchestrated spectacle that was only witnessed live by a small group of people directly involved in the project. This was for safety reasons, which are self-evident in view of the dimensions of the bridge. In rhythmic coordinated movements, the feat was thus accomplished in just under 2 hours, across the motorway to its destination.

Although the faces showed relief and joy at what had been achieved, there was still a long way to go before the end of the day. During the remaining days of the weekend, work continued diligently and the bridge was finally connected to the bridge bearings thanks to welding and concrete work. In the coming months, the displaced bridge will become a “real” railway bridge. After the construction of the roadway slab, the construction of the track bed will follow with all the elements that are necessary for this.