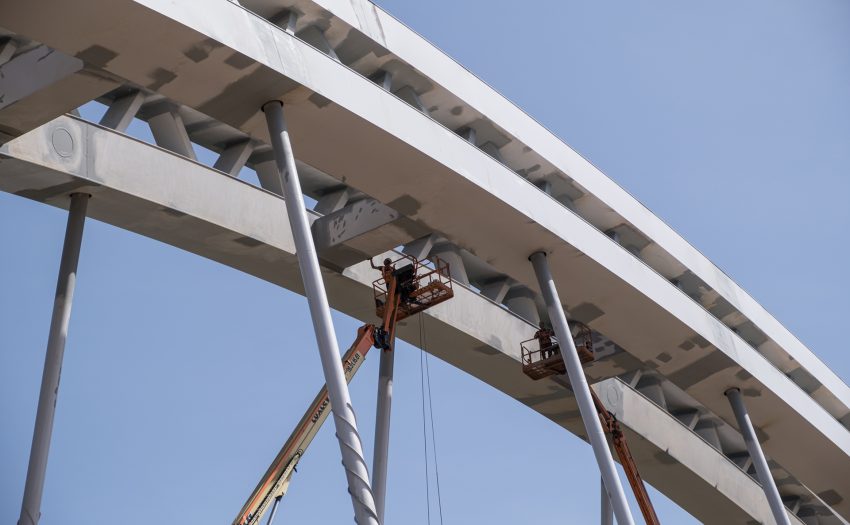 A few months have passed since we visited the OA14 construction site. When you see the gigantic structure along the A3 motorway, the work being carried jumps literally to the spectators’ eyes. The arches, already fully assembled, are over 40 metres high. More precisely, two arches per side, equipped with a total of 24 suspension lines that allow the 5,850 tonnes to be transferred to the load-bearing elements of the bridge.

Rui, CFL projet manager of the new track between Luxembourg and Bettembourg

From the high gondolas and sheltered from the wind and rain, each hanger is welded, one by one. The workers doing this work are among the best in the business – and rightly so, because every weld must be flawless. Since 2020, the welders have been on site, assembling the 22 heavy steel elements that make up the ‘tie rods’ (the side elements of the bridge on which the deck will rest) and the 36 elements that make up the upper and lower arches. In addition, numerous struts and transverse connections give the bridge the stability it needs.

“For the welding alone, no less than 30 tonnes of welding wire were required,”

explains Stefano, the company’s project manager, to give an idea of the scale of the work involved. Each stage of the work is carefully monitored. Ultrasonic, magnetic and visual tests are all part of the process.

In addition to the welding work, the entire bridge, i.e. its entire 200-metre length and even its 40-metre height, is painted to prevent corrosion. At the end of the painting work, no less than 25,000 litres of paint will protect the metal parts of the bridge from oxidation.

At the beginning of October, a new highlight of the project will be on the agenda. The 5,850 tonnes of the bridge will be lifted to a height of almost 5 metres above the ground using 30 hydraulic machines (“KAMAGS”). A feat for which several days have been planned in the project schedule. Once the desired height has been reached after almost two weeks, it will be possible to move the bridge onto its final supports using KAMAGS.