OA14: 36 elements that form the arch of a bridge 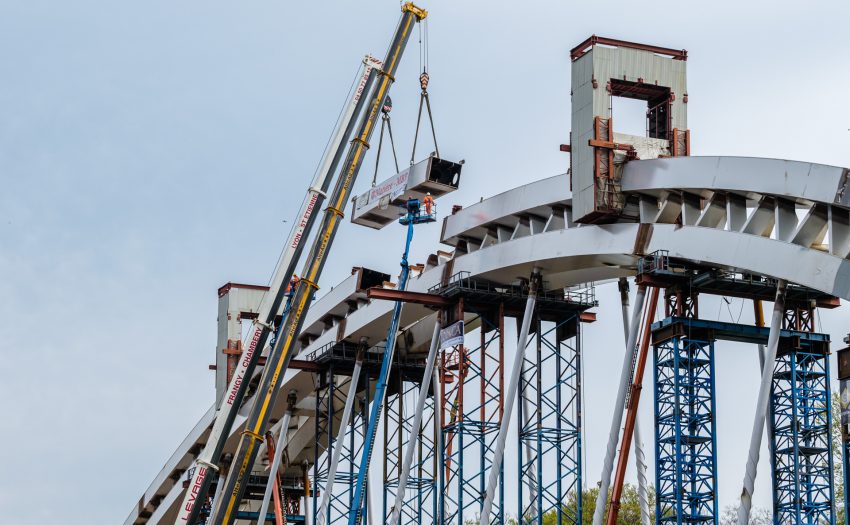 For the past few months, drivers who regularly take the A3 highway, have been able to follow the progress of the work on the OA14 railway bridge that is taking place in the vicinity of the highway. This past weekend, a major milestone was reached with the installation of the key arches that complete the two double arches, which, by means of the hangers, will help carry the roadway slab of one of the largest “bow-string” railway bridges in Europe.

The 36 elements of the arch in place

The assembly and welding of this spectacular bridge, which began in mid-October 2021, has progressed well. Last week, the installation of two 300-tonnes cranes indicated to observers that an important step was about to be taken on site. Last Friday, the last two of the 36 elements that will form the two double arches of the railway bridge were installed. A real milestone that we did not want to deprive you of.

After the completion of the lower arch in January 2022 and the upper arch this past weekend, the two double arches are now complete and make the final silhouette of the bridge.

The involvement of a competent team (hired companies, engineering office, assistance to the project manager, health and safety coordinator) to carry out the construction of the OA14, which is being built as part of the new railway line between Luxembourg and Bettembourg and which will play an important role for the mobility of tomorrow of our clients, is essential until the bridge’s final implementation.

The installation of the key arches: a precise task

For the installation of the main elements in their final position the two cranes were installed and precisely positioned the previous day. At a height of 42 meters, the key arches, box elements weighing more than 40-ton, measuring 14.4 meters in length and 2 meters in height, were installed.

In a first step, the elements were lifted with cranes and installed with millimeter accuracy. Once they had been provisionally installed, a geometrical check was carried out on their position according to the assembly plan. The elements were then clamped and welded together.

Thanks to exemplary coordination and teamwork, the installation was completed in just 4 hours. 20 welders, 6 assemblers and the project managers were on site for this exceptional work.

The OA14, which upon completion will be one of the largest “bow-string” bridges in Europe, is being built in the context of the project for a new 7-kilometre railway line between Luxembourg and Bettembourg. The construction of this new line is part of the CFL’s expansion and modernisation program. Alongside the existing Luxembourg – Bettembourg line, this new line will provide a significant increase in capacity for this particularly busy section of the rail network. This is a requirement for the continuous improvement of the service quality offered to customers and more specifically for the punctuality of passenger and freight trains to/from the south.

The next steps of the project

The next step will be the welding of the arch boxes, both from the inside and the outside, as well as the upper parts of the hangers, which are grafted onto the lower arch ends. In mid-June, once the welding work has been completed, the temporary support beams, which currently support the entire steel structure of the two double arches and its 24 hangers, will be removed. At this point the arch will settle slightly into its final form and also the lower part of the hangers at the tie rods of the tension bands can be welded.

As of September, work will take place in 9 stages to raise the bridge to its transport height as well as the simultaneous removal of the support beams under the two tension bands. The shifting, i.e. the impressive moving of the 5,850-tonbridge (without concrete roadway slab) over the A3 highway, will take place in October 2022.