“The funicular is one of a kind” 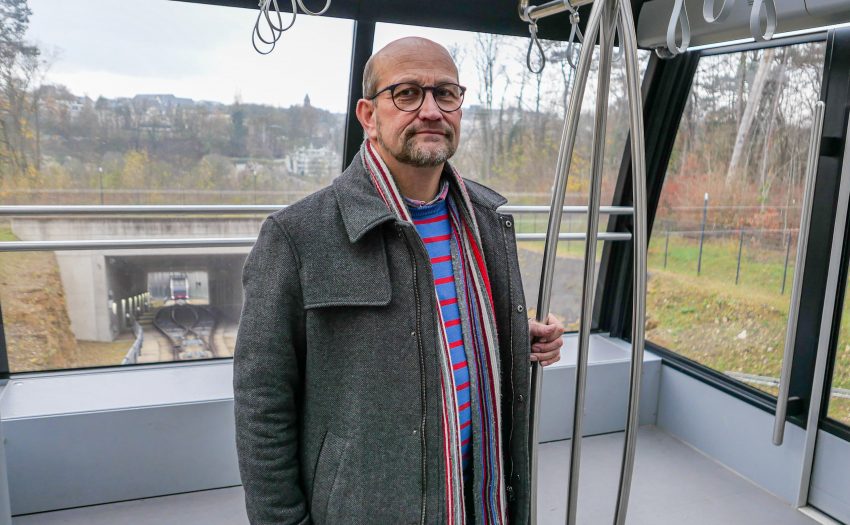 7.5 million passengers and as many memories. Since it opened on 10th December 2017, the CFL funicular has found its place in customers’ journeys… and sometimes in their hearts. A look back at the first five years of operation of an infrastructure where the human element is never far away.

Whether they are tourists, curious to discover it, or workers who have made it a part of their daily mobility, the CFL Pfaffenthal-Kirchberg funicular has proved its usefulness since it came into service five years ago.

On Sunday, 10th December 2017, four major mobility infrastructures were inaugurated (including the Pfaffenthal-Kirchberg railway stop, part of Howald station and the first tram line). A day in which winter played a part in the programme.

“It was the beginning of a new era, a leap into the unknown, between excitement and nervousness, but in the end everyone was happy that the funicular was there,” recalls Martin Dahm, Head of the Electromechanical, Building and Funicular Unit in the CFL’s Infrastructure Maintenance Department, with a smile.

Five years later, the funicular has 7,000 passengers per day (on weekdays) and passed the 7.5 million passenger mark. Martin Dahm takes a look at this adventure in video:

A mix of professions and ages

The creation and training (in particular with the manufacturer in Switzerland) of a multidisciplinary team (mechanics, electricians, etc.) are among the reasons for the smooth running of the infrastructure. “We can count on a team of 14 employees with complementary qualifications and varying degrees of seniority, which is very rewarding,” adds Martin Dahm.

The funicular with its four cabins (two per system) requires a team of two drivers to operate it seven days a week on two independent systems. The latter is regularly upgraded to take advantage of this diversity. “With two operators, we can carry out maintenance and still be available to customers, as the system is automated,” says Martin Dahm.

Innovation at every stop

“In an urban environment, the funicular is one of a kind in Europe. We have to be able to ensure 99% availability, which our configuration allows.”

The integration of innovation into the daily operation of the funicular also contributes to its good health, starting with the attention paid to the cable operated for the ascent and descent of the cabins.

“The cable is inspected monthly by camera and we carry out a kind of magnetic X-ray three times a year,” adds Martin Dahm. “All these operations are recorded in a specific application that all agents use on a tablet and that serves as our central point of communication and task tracking, with a paperless approach!”

This approach regularly attracts professionals and specialists from all over Europe who are curious to learn more during an on-site presentation.

Others have a real “coup de coeur”, like the surprising ballet that took place shortly after the opening. “A grandfather made the journey several times with his grandchildren during the Christmas holidays after the launch,” recalls Martin Dahm. “We asked them if they had any problems, but the man explained that they just wanted to experience the funicular. It was so touching that we showed them our engine room.”

Among the many memories, he also remembers the interest shown by pupils on a school visit who meticulously prepared their questions.

“Personally, the funicular was a new challenge, a new aspect that I had not anticipated in my career”, Martin Dahm summarises. “In the meantime, it has become such a passion that, when the opportunity arises, I don’t want to miss a visit when a funicular is close to a holiday destination, much to the delight of my family“. (smile)

The Pfaffenthal-Kirchberg railway station and funicular, with its enticing view of the valley and the “Red Bridge”, has become a “hot spot” for those who like to take pictures of the capital.

These are signs of the importance of these facilities in the public mobility offer. These are encouraging signs for their teams, who intend to be there for (at least) the next five years!

The funicular in 5 key figures