The Luxembourgish rail network is constantly in motion: Every day, around 1,000 trains run on the network, carrying passengers and goods. All lines of the entire Grand Duchy converge in the Luxembourg train station, the central hub of the railway network. Over the past few years, the number of customers using the services offered by the CFL Group has increased significantly, leading to bottlenecks in various parts of the network, such as the north exit of the main station. In order to increase the capacity of the network and in particular the Luxembourg railway station, a large number of major projects is underway. These include the construction of a second railway “Pulvermühle” viaduct and the double-track extension of the section Luxembourg – Sandweiler-Contern, two major projects that will help to eliminate these bottlenecks. These spectacular projects are a real challenge for all the employees involved, especially given that these works are done while the rail network is running. 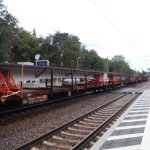 The delivery of the girders which will soon carry the new overpass in Cents, by means of large work trains and special cranes in October.

…have been installed this autumn.

The second “Pulvermühle” viaduct will be operational in 2019.

The second “Pulvermühle” viaduct will be built in parallel to the existing railway bridge at the northern entrance to the main station. The construction project, which has been ongoing since 2009, aims to create more capacity, in particular for the route towards Luxembourg – Wasserbillig – Trier (line 30) and the northern route (Luxembourg – Ettelbrück – Troisvierges, line 10), improving the flow of rail transport. After completion of the work, the viaduct will be 242 meters long and have two lanes to the east of the country. A 275 meter long riprap will serve to connect the new lanes to the east with the existing ones. Recently, noise barriers and seven catenary supports were installed on several weekends during a temporary closure of the section. The viaduct will be operational in 2019, while construction will continue until 2020.

The double-track extension of the section Luxembourg – Sandweiler-Contern

Closely linked to the construction of the second “Pulvermühle” viaduct is the double-track extension of the Luxembourg – Sandweiler-Contern section of the line 30. Like the second “Pulvermühle” viaduct, the expansion project, which has made good progress since its beginnings in 2013, aims to increase the capacity of the network to improve the punctuality of trains. The work also includes the laying and rebuilding of the Cents-Hamm and Sandweiler-Contern stops as well as the removal of the PN56 railway crossing at Cents. In order to increase the safety of all road users, this level crossing is replaced by an overpass. Last October, 16 carriers were installed using special work trains and cranes to carry this new bridge. With the commissioning of the new facilities in 2019, the finishing works of the section will be completed.