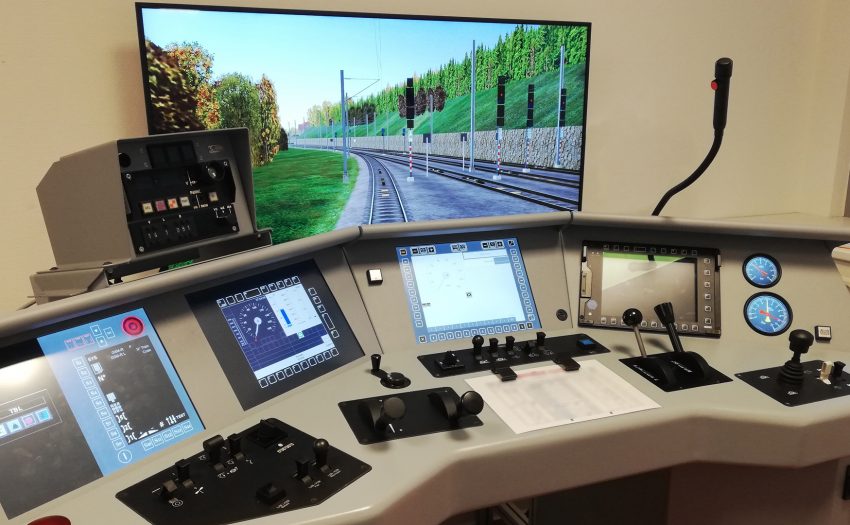 Did you know? The CFL has a driving simulator for training its future train drivers. In addition to the many hours of accompanied driving lessons that take place in real conditions and with the assistance of trainers, CFL train drivers, known as “mécaniciens”, can take advantage of a driving simulator to put the knowledge they have acquired during approximately one year of training to practice.

From theory to practice

As with the car licence, it is a matter of mastering theory before moving on to practice. In order to obtain train driving certificate, the future CFL drivers study their working environment, their role and responsibility in rail transport operations, but also and above all the regulations and specificities of the Luxembourg, German, French and Belgian railway infrastructures.

The candidate will deal with the rolling stock operating on the CFL rail network by going through the technical requirements of the traction units. Practical courses deal mainly with the placement of equipment and the functioning of the control systems for putting rolling stock into service, as well as the repair of breakdowns in traction units. If they have obtained their driving licence, the students benefits from a practical training over 4 months. First driving lessons in real conditions under the supervision of a tutor and experienced train drivers allow the candidate to test his skills on the spot.

About 6 months after the start of training, the trainee CFL train driver complete their first driving lessons in the simulator.

What’s the reason for this simulator?

From the interpretation of signals to thinking ahead and braking, as well as in dealing with the various tools of operational communication, this simulator teaches the entire route of a train, whether under so-called normal conditions, i.e. without incidents, or with so-called fault situations.

A train driver must be able to react quickly and appropriately in any driving situation on the rail network, including more or less rare incidents. These can be an obstacle on the rails or a fault at a level crossing, a power failure of the overhead line supply. Several case studies can be displayed on the screens of the CFL driving simulator. The candidate learns, among other things, how to detect deviations in the signalling system, but also how to behave correctly in case of a received radio warning.

The simulation of night driving is possible, including more unpleasant weather conditions such as rain or snow showers or even fog.

The “debriefing” is a very important stage after each exercise in the simulator. So each exercise is followed by a constructive dialogue between the instructor and the candidate. The aim of this is to make the latter aware of any mistakes that might have been made during the exercise so that they can be corrected immediately. This is how the expression “practice makes perfect” comes full circle!

What is the general impression of the candidates after a session in the simulator?

Each basic training course for train drivers is followed by a final examination in theory and practice. The simulator examination is a crucial point in the learning process. It makes it possible to check whether the candidate is using the right hand movements before they travel alone with a train in commercial operation. Even experienced train drivers can get nervous in examination situations. It should not be forgotten that the simulator is used to master driving situations under more or less difficult conditions. That means, driving skills, especially anticipated braking, remain the first challenge that candidates must master. Hence the importance of regular and increased practice in such a simulator.

A train driver, regardless of their experience, practices in the simulator from time to time.

Depending on the training objectives, the simulator, is a key asset for putting theory into practice. It should be noted that, contrary to what is required by German law for our colleagues at DB (Deutsche Bahn), the driving simulator is not yet a legal requirement in Luxembourg.

Once they have completed their apprenticeship and their driving ability has been certified, CFL drivers are entrusted to the “encadrement conduite”-unit (driving supervision unit) and its instructors (also known as coaches) for continuous training. An instructor provides driving coaching every six months.