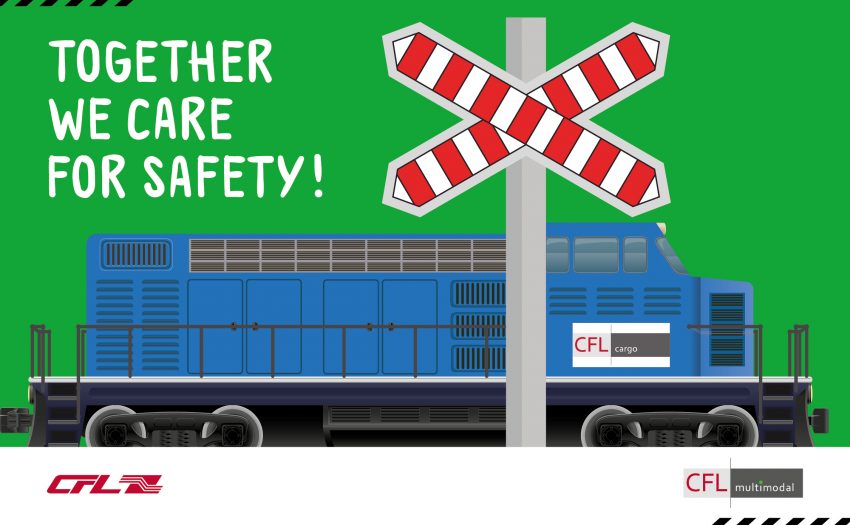 Since 2009, the railway community, in collaboration with a growing number of road sector organisations, has been organising an International Level Crossing Awareness Day (ILCAD – www.ilcad.org) in more than 42 countries around the world under the slogan : « Act safely at level crossings ».

As in previous years, the CFL, together with the Ministry of Mobility and Public Works, the Grand Ducal Police, Sécurité Routière (Road Safety Association) and the Association Nationale des Victimes de la Route (AVR) (National Association of Road Traffic Victims), are marking this day to raise public awareness of safe behaviour at railway crossings.

This year, on 11th June 2020, the CFL has launched an action aimed specifically at truck drivers on manufacturing / production sites. In order to raise drivers’ awareness of correct behaviour at level crossings, i.e. driving in compliance with the rules of the Highway Code, the CFL have prepared a specific flyer that will be distributed at manufacturing / production sites outside the CFL, which are have with rails and level crossings.

Closed level crossing barriers are often a test of patience. There have even been cases in which road users actually ignored the barriers and crossed the rail tracks, despite the ban. Such people are frequently unaware of the danger to which they are exposing themselves. This often underestimated risk can have dramatic consequences. On average 75 barriers are damaged and / or broken yearly, which is equivalent to 1 to 2 incidents per week and represents a significant cost to tax payers, without mentioning that this means 75 situations where a person’s life could be at risk. In 2019, the CFL recorded 87 incidents at level crossings involving private cars, trucks, agricultural machinery, bicycles or pedestrians. From January to the end of May 2020, 30 incidents occurred.

Yet even an apparently trivial encounter between road users and closed barriers can cause damages and technical problems that can have repercussions for rail travel in the entire CFL network, such as high costs for remedying problems or repair work and the delays caused by this.

Crossing closed barriers constitutes a violation of the “Code de la Route”, or highway code, and it comes at a cost. Car drivers have to pay a 145 euro fine if they ignore a warning signal and also receive two penalty points on their driving license. If a pedestrian crosses a closed level crossing, it can cost him up to 3,000 euros.