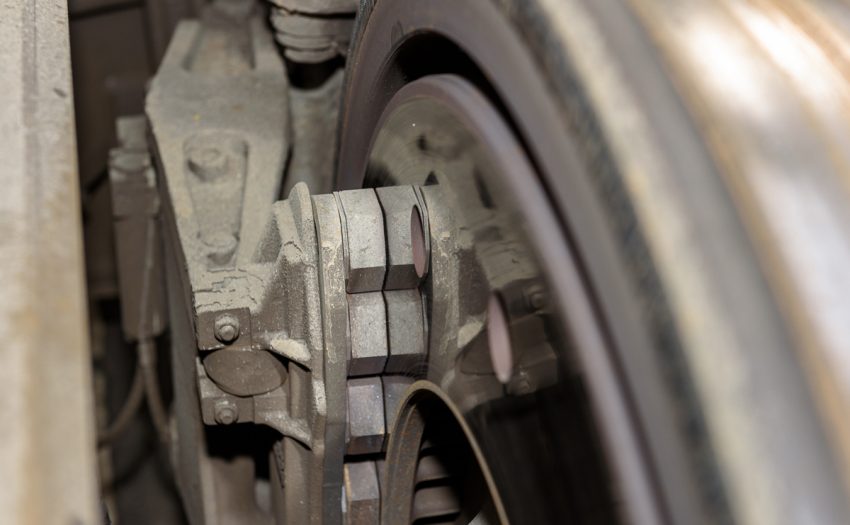 Rolling stock is modernised over time. Equipped with the latest state-of-the-art technologies, its speed performance has increased tenfold, which goes hand in hand with optimizing the braking systems.

There is a tendency to misjudge a train’s speed, weight and, consequently, stopping distance. A passing train, not stopping at a stop or station, can reach a speed of 140 km/h.

In contrast to a car, where the weight does not exceed 3.5 tons, a train carrying passengers in a maximum of 16 cars weighs up to several hundred tons. A passenger train therefore needs up to 1,200 metres to stop, which is 13 times the length of a standard football field.

Brakes adapted to the equipment

The braking system, which must be as efficient as possible for rolling stock carrying thousands of passengers on a daily basis, varies according to the type or series of trains. Not all trains run at the same speed, have the same weight or length. As far as CFL rolling stock is concerned, three braking systems with very different characteristics are to be considered:

This braking system, which is onboard all CFL passenger trains without exception, is powered by compressed air circulating in the brake system and operating brake cylinders.

Description: A so-called “brake pipe”, with air supply via the railcar, runs inside the train and its wagons to ensure the continuity in the vehicles and to control the brakes of the train. This main air duct, in other words, supplies the air tanks of each vehicle so that each of them has the necessary air reserve for braking.

This type of brake is also referred to as an “automatic brake” because a loss of brake pipe pressure results in the automatic application of braking force to all vehicles on the train, for example, when a passenger applies the emergency brake.

This so-called “regenerative braking system” uses the engine as an electricity generator. The mechanical energy (produced by the movement of the train) is converted into electricity and sent back to the catenary. During braking, the induced counter-effort causes the train to decelerate, without the mechanical brakes being applied. In other words, electric braking effectively protects all key mechanical components such as the axle, brake units, etc. Automated by being taken over by the driving system according to the speed of the train, this regenerative braking system is complementary to the pneumatic (mechanical) braking system. This type of braking is found on all CFL railcars and locomotives (2000, 2200, 2300, 3000 & 4000 series).

The electric braking system has several advantages, such as saving electrical energy through the recovery system. Savings are also made on brake wear parts. This tends to minimise the downtime of rolling stock in the workshop, and thus optimise its availability.

The electromagnetic brake is a mechanism that is not dependent on wheel-rail adhesion and whose braking action is performed directly on the rail.

In other words, a magnetic pad (see photo) fixed under the bogie frame, in the wheelbase, is attached to the rail. The train is held in place by the friction of the pads, which are in turn pressed by the magnetic attraction obtained from the magnets. Complementary to a mechanical braking mechanism of the “pneumatic braking” type, the magnetic brake is used in principle in the event of emergency braking (known as a “full brake”).

Monitoring and repairing for your safety!

By setting up an anti-blocking system, the braking force is adjusted to minimise the appearance of slipping or sliding. For a shorter or longer period of time, strong braking will be very strenuous on the various mechanical components, such as axles, brake discs, brake pads or soles.

The use of the brakes requires undivided attention. When inspecting rolling stock before departure, the driver first checks the braking system. A brake test is carried out before each departure of a train. Even after the train has left the station, the driver must ensure that he brakes properly.

In the workshop, the entire CFL fleet is also subjected to extensive maintenance at regular intervals, during which the brakes are dismantled and thoroughly inspected to ensure their integrity. Inspection intervals may vary depending on the type of rolling stock involved. For example, the Z2 series (2000) material, the brakes are inspected every 10 days and the brake pads are replaced every 20 days (between 4000 and 6500 km). For the “KISS” series (2300) material, wear is checked approximately every 40 days or every 40,000 km and replaced if necessary.